In a Hydraulic Surge Brake System

Hydraulic surge brakes function by converting the inertial difference in pressure between the tow vehicle & the trailer, experienced during braking, into a mechanical pressure that is applied to the push rod of the surge brake coupler.

This inertial difference in pressure between the two vehicles is dependant upon the rate of deceleration of the tow vehicle during braking & the mass of the towed vehicle [ trailer ].

At a given rate of deceleration, a trailer of a given mass will create an inertial difference in pressure of a certain value which will create a given hydraulic output pressure & a proportionate braking response.

If the rate of deceleration [ braking ] is increased for the same trailer mass, the inertial difference in pressure will be increased, & the hydraulic output pressure from the master cylinder will be increased, resulting in a proportional increase in trailer braking.

If the rate of deceleration was maintained at original values & the mass of the trailer is increased, the differential pressure will be increased & the hydraulic output pressure will again be increased resulting in an increase in braking response.

Therefore, at a given rate of deceleration, a more heavily loaded trailer will have a greater differential pressure between itself & the tow vehicle, than a lighter trailer, & therefore the hydraulic pressure from the surge brake coupler will be higher for a heavier trailer than the more lightly loaded trailer.

As an example, if we compared the hydraulic brake pressure output from identical brake couplers for two different trailers, trailer #1 with a 22’ boat with a GVW [ Gross Vehicle Weight] of 4000# , & trailer #2 with an 18’ boat & a GVW of 2000# , both operating with the same rate of deceleration, it is obvious that we would experience higher hydraulic brake pressure from the trailer with the greater weight , the 22’ unit, due to the increased mass of the heavier boat at a given rate of deceleration.

THEREFORE WHEN THE TRAILERED LOAD IS RELATIVELY LIGHT IT WOULD BE WISE TO CONSIDER A BRAKE SYSTEM THAT WOULD GIVE BETTER PERFORMANCE AT LOWER BRAKE COUPLER HYDRAULIC OUTPUT PRESSURES.

Disc brakes require higher static line pressures for effective braking torque to be experienced. Therefore a lighter towed load, such as the 18’ boat in the example above, will probably not experience effective braking with disc brakes, due to the lower mass & therefore lower differential pressure created at a given rate of deceleration, whereas a heavier towed load such as the 22’ boat noted above will have a much better braking response with disc brakes, because of the higher towed weight, & greater differential pressure creating a higher hydraulic output pressure.

Because of this levered force, developed at the drum brake cluster, drum brakes will give better braking torque, at a lower hydraulic pressure & are therefore more effective for lighter towed loads.

With all of these factors taken into consideration it is advisable to install drum brakes on trailers if the GVW is less than 3000#.

For trailers over 3000# GVW the braking performance can be relatively comparable for both drum & disc brakes.

It is also important to match the volumetric requirements of the total brake system load to the volume output capacities of the master cylinder of the brake coupler.

Most trailer hydraulic drum brake units require manual adjustment of the brake units. This is normally done once a year or every 3000 to 5000 miles .

With drum brakes one notable condition does occur, that can tell you when the drum brake clusters need adjusting. As the shoes of drum brakes wear down the wheel cylinder & push rod must move farther out, per braking cycle, to have the brake shoes engage the hub drum. This requires more hydraulic volume for each wheel cylinder on each stroke of the braking cycle. As the brake pad wear down continues, eventually the volume requirements of the wheel slave units will come close to, or exceed the volumetric output capabilities of the master cylinder. When this occurs the movement of the surge brake coupler will be extreme causing a notable [ clunking ] as the trailer is stopped & then moved forward after braking.

This is a sign that your brakes need adjustment. It may also be the sign of a bad brake coupler shock damper.

It is important to note that the greater the number of individual drum brake units on a trailer, the more sensitive the system is to proper brake adjustment before this notable banging occurs in the brake coupler.

A question that we are often asked is , I have a tandem or triple axle trailer & my trailer’s brakes are not effective in stopping the trailer, do I need brakes on all axles of my trailer?

A rule of thumb for brake system capacity is to rate the brake system stopping capacity at the same value as the axle capacities.

For example: If you have a tandem axle trailer with two 3500# axles, but only one of them has brakes, then you would be advised to calculate your best stopping capacity at 3500#.

If you have brakes on both axles, you can estimate your stopping capacity to be about 7000#.
Be aware that these values are only a rule of thumb & are not to be construed as design estimates for the stopping capacity of any trailer.

It is also important to remember that the optimum values noted above, are only applicable to properly adjusted & properly operating braking systems.

Any trailer that has tandem or triple axles that does not have brakes on all axles can be a recipe for disaster.

Invariably multi-axle trailers should have brakes on all axles for safety’s sake.

The DMV of each state has it’s own regulations regarding the braking requirements on trailers, however SAFETY CONSIDERATIONS make it VERY important that the trailer owner strongly consider putting brakes on all axles of a multi-axle trailer.

Properly working brakes can be the difference between a tragic accident or a close call.

They are probably the cheapest insurance you could ever buy. 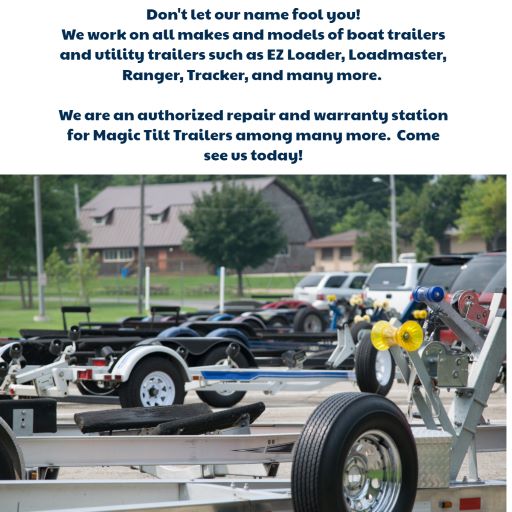 Welcome to Champion Trailer Parts and Repair
Champion Trailers® is the one stop trailer shop for all your trailer parts needs and we are here to help keep your trailer rolling! Champion Trailers provides parts, service, and new trailer sales our local customers in Southeast Louisiana (Slidell, Covington, Mandeville, New Orleans) and the entire Mississippi Gulf Coast.Champion Trailers carries parts for many different brands of trailers such as Loadmaster, Starline, Magic Tilt, Magic Trail, EZ Loader, Champion, Ranger, Tracker, Venture, Float On, Big Tex, Carry On, Amera Trail, Dilly, PJ Trailers, Shoreline, and many more!Champion Trailers is the leader in Southeast Louisiana and the Mississippi Gulf Coast for boat or utility trailer repair. Champion Trailers can provide yearly maintenance, modifications, and repair on most boat and utility trailers such as brake install, bunk support install, axle and suspensions, lights, electric brakes, and much more! A FREE repair estimate is part of our customer service and our goal of keeping YOUR trailer rolling..

**All images, articles, catalogs, and descriptions on our site and catalog are subject to copyrights and trademarks.  Use of these items without prior written approval will be considered to be infringing on our trademarks and copyrights and will be dealt with accordingly.